If you’re worried if it’s a good idea to bring your kids to the rainforest, I understand that concern because I used to have the same reservations myself. But after sending lots of families to some of the most remote lodges in the Amazon, I realized that kids actually dig the rainforest even more than adults. The best example, for me, was hearing my own sister’s impressions of the Huaorani Ecolodge – a trip I used to think was only suitable for rugged backpackers.

My dad, step-mom, and sister travel a fair amount; while they dig comfort, they mostly want to understand how other people live and view the world. The Huaorani Ecolodge trip had a profound effect on them, including my (then) 10-year old sister. Here are her words about the experience:

“The plane was a little bumpy but overall good. The view was spectacular and the the landing in the field was very nice. One of my favorite parts of the lodge was meeting the village people. They were so nice and had so many interesting things. We went on a hike to another village and met many kids my age. They were all very kind. They also loved to climb all over the place! They seemed very entertained when I danced the chicken dance. I also liked the food, it was better than City Street Hot Dogs and it was more exotic! Our guide’s name was Jose (don’t know his last name). He was very knowledge[able] about the forest, and spoke very good English.”

My sister also explained that the other kids painted her face with the natural red paint found in the forest, but they didn’t have time to make grass crowns together. They did make a different kind of crown for our dad though, which my sister said everyone thought was hilarious because it was a shaman’s crown and not really for an outsider. 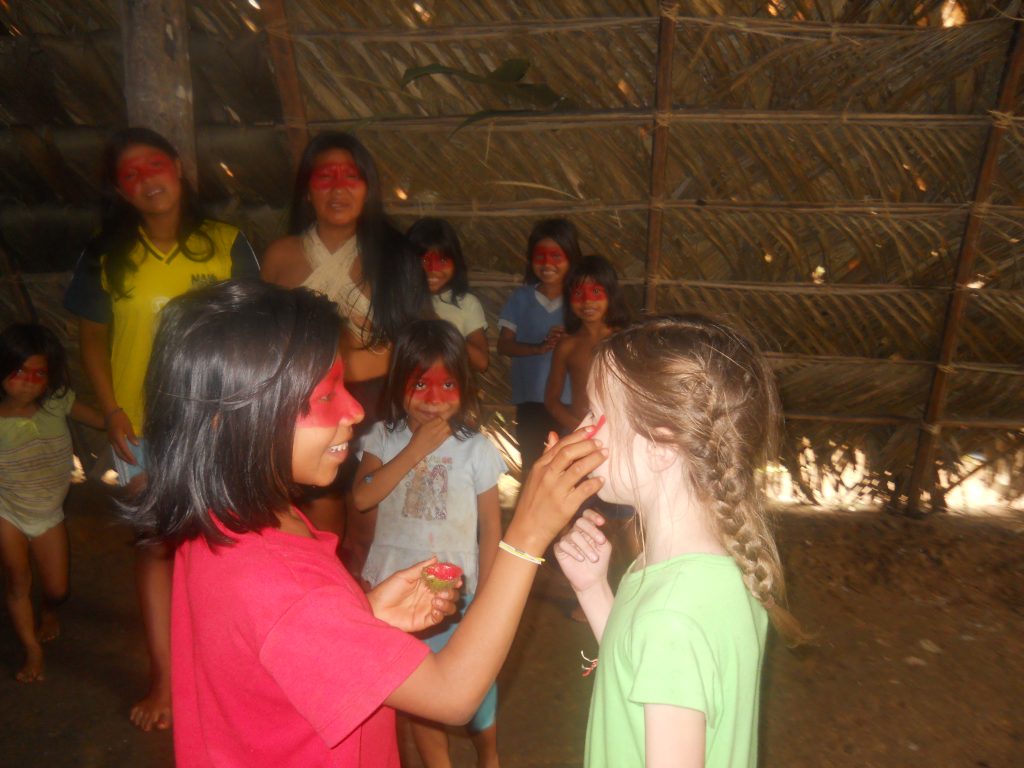 “I loved the place. There were no bad parts in the whole trip there. Dad falling in the armadillo hole was hilarious.”

At the community, my sister demonstrated one of her Kung Fu forms (which she has been practicing for years) using a huaorani spear in place of the traditional staff.

I also pointed out some downsides to the trip that other people worry about, like bugs, and asked what she thought about this:

“There were TONS of bugs. They were all amazing though. All types of bugs, only your imagination can imagine. There were some mosquitoes, but I don’t really remember them.  Some other bugs bothered me, but that’s life.  I believe we had to put on mosquito repellent, I just don’t remember it.”

And of course: “Also, here is a tip for hiking there: Beware the armadillo holes!! They are SUPER deep.”

We talk about her trip to the Huaorani Lodge a lot because it was quite an amazing trip for all of them. I told her about an article I read about the oil drilling in the Yasuni National Park and asked her what she thought about the oil development all travelers see once they exit the Huaorani territory. She answered, “It was horrible. The is oil is bad, but we need to know what’s happening to these people. That the oil industry is doing things to hurt these people.”

My sister’s experience with the Huaorani showed me that a tour into the deep rainforest is educational, exciting, and deeply affecting – and it’s probably a trip suitable for any kid curious about nature and life in the rainforest.