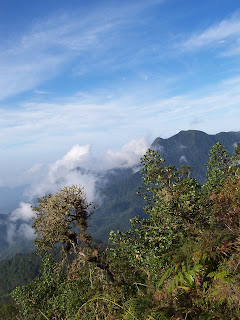 I arrived in Colombia for a birdwatching tour and knowing the names of only a dozen or so species back home, I knew I had a lot to learn. In three days, I´ve at least quadrupled that number. I have some top quality birding guides leading the way which makes it all much easier. But even without the guides, it would be impossible not to notice the amazing avian diversity and density in Colombia. The country actually ranks first in the world for number of species (barely beating Brazil and Peru) with close to 1,900.

That number is growing too, I learned as we watched an owl swoop overhead by moonlight in the El Dorado Nature Reserve. The owl, like a few other species around Santa Marta, has been recently ¨rediscovered.¨ This means that one specimen had been discovered in the early 1900´s, but never seen or recorded since. When it was discovered again in the region, research showed it had been described before but forgotten because it so rarely appeared. At this point, the owl is in the process of receiving its official scientific name so it remains unnamed for the time being.

The new owl is just one example of why Santa Marta, and specially the El Dorado reserve, is such an attraction to birders. Of the over 100 species found in the area, 16 are endemic (meaning they aren´t found anywhere else on earth). Not being a birder I know that I can´t fully appreciate such a destination; for instance, I don´t share the same long face as my fellow travelers when the Tapaculo wasn´t spotted yesterday, despite hearing its calls for 15 minutes. Nevertheless, this is a stunning spot and the biodiversity will charm even the casual naturalist. The Santa Marta Sierra Nevada stands apart from any other mountain chain, rising thousands of meters straight from the ocean. Its most famous area, Tayrona National Park, is finally safe for tourists to explore. After such a tumultuous period in which more than one-third of the area was controlled by guerillas, I´ve found people speak freely of the relief they feel now and embrace tourism to the region.

Tomorrow, flying from Medellín to Bahía Solano on the Pacific coast- a place you can´t find anywhere on google earth. More birding and hopefully some time to surf . . . .